Climate change policy and the energy transition continued to dominate the attention of the energy industry and policymakers as we moved into the final days of Q3 2021. At the regulatory level, the pause on federal oil and gas leasing continued to be an issue even after a federal district court ordered it to end. The Department of the Interior developed a schedule to resume lease sales, but on a slower and more limited pace. President Biden announced his intention to appoint a utility regulator, Willie L. Phillips, as the new FERC Commissioner, which if confirmed would ensure all of the seats are filled on the Commission.

Two comprehensive bills in Congress, the infrastructure bill and the budget reconciliation package, are currently being considered, but there is uncertainty over the final outcome. The infrastructure bill contains numerous provisions that would facilitate the development of renewable energy resources and decarbonization, including the extension and enhancement of the 45Q tax credit for carbon capture and storage projects. The budget reconciliation package would eliminate several decades of tax incentives, such as expensing of geological and geophysical expenses, intangible drilling costs, and percentage depletion allowance. It also contains a framework for a methane tax, to be applied across the value chain, designed to discourage methane emissions. A number of incentives for renewable energy production and research are also included in the package.

Developments globally continue to impact the domestic energy industry. The European Commission of the European Union (EU) announced the introduction of twelve pieces of legislation, known as the European Green Deal, that aim to cut carbon emissions across all 27 EU member states. The overall goal of the legislative packages is to reduce the EU’s emissions by 55% from 1990 levels by 2030 and to achieve net zero emissions by 2050. The legislation would tighten the EU’s existing emissions trading system, as well as establish a carbon tariff for goods entering the EU based on their ability to meet stringent EU emissions and carbon standards. A carbon border adjustment tax will emerge in Europe and is being discussed as a potential vehicle in the U.S. All of this impacts trade policy and increases pressure to decarbonize and increase ESG performance, not just for energy commodities, but for the inputs to developing the commodities.

The U.S. continues its march toward greater ESG disclosure, led by the investment community. At the same time, there are public policy developments on the ESG front. After soliciting public comments on the concept, the Securities and Exchange Commission (SEC) is moving toward some type of mandated disclosure of climate change-related risks and potentially broader ESG topic disclosure. Congress is also addressing ESG disclosure. Versions of the infrastructure bill contain language that would require the Secretary of Energy to develop and transmit a report to Congress within one year of its passage to assess using digital tools and platforms as climate solutions, including a summary of “opportunitiesto enhance the standardization of voluntary and regulatory climate disclosure protocols.” House-passed legislation would require public companies to annually disclose ESG metrics and their connection to long-term business strategies.

Over the past quarter, energy prices continued to rise, demonstrating a full recovery of oil and gas prices in the early days of the pandemic. Natural gas prices have surged to above $5.00 per MMBtu, prices that haven’t been seen in years. In Europe and Asia, they are above $20.00 per MMBtu. Price increases are being driven by low supply, and there is a genuine fear of natural gas shortages in the Northern Hemisphere this winter. Crude oil prices have risen above $70 per barrel, also driven by supply factors. Bank of America believes that oil prices could soar to $100 per barrel should we experience a cold winter. Higher prices have led President Biden to call upon OPEC to boost its output. 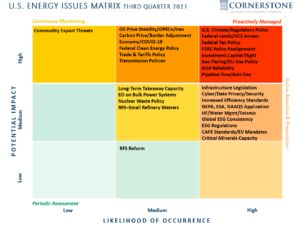