The First Quarter 2021 saw great change in the U.S. in terms of policies and regulations impacting the oil and gas industry. Executive actions paused oil and gas leasing on federal lands and the offshore, while climate-related regulations and legislation looked to significantly alter the processes for approvals for oil and gas drilling, pipeline development, and virtually every section of the energy supply chain. “U.S. Climate/Regulatory Policy,” “Federal Lands/OCS Access,” and “Pipeline Opp/Anti-Dev” remained red “high-high” issues, dominating news and attention regarding energy.

At the same time, a February deep freeze and major blackout in Texas took the “Grid Reliability” issue from “medium-likelihood” to “high-likelihood,” landing in the red box. Then, an early second quarter cyberattack of the Colonial Pipeline, with devastating effects on gasoline supply in the Southeast and Mid-Atlantic, brought “Cyber/Data Privacy/Security” from “low-likelihood” to “high-likelihood,” landing it in the red box for the first time ever.

A slow and constant strengthening in oil prices over several months has moved the “Oil Price Stability/OPEC+/Iran” to “medium likelihood,” and natural gas prices have been buoyed as well, largely due to a recovering global economy and lessening impacts of the pandemic on the developed world amid a massive vaccination effort. That helped move “Economy/COVID-19” out of red, one box to the left. “EO on Bulk Power Systems” stayed in place, not due to a lack of activity, but due to a Biden administration reversal of a Trump administration prohibition on U.S. companies procuring certain bulk power systems from China. There have been many similar executive action policy reversals in the first several months of the Biden administration. We will see how legislative packages like “Infrastructure Legislation,” which moved one space rightward to the red box, play out in the coming months as the Senate seeks to find policies that can muster the 51 votes needed for passage under the budget reconciliation process. 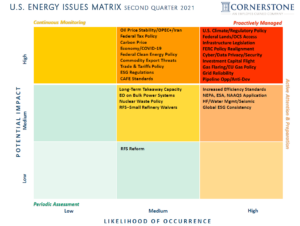