Cornerstone has issued its Second Quarter 2020 U.S. Energy Issues Matrix as the global energy industry struggles with the worst demand collapse in history due to the COVID-19 pandemic.

At the issuance of the First Quarter U.S. Energy Issues Matrix, oil prices and demand were in a tailspin, with prices eventually falling below zero for the first time in history during the second quarter. This was in large part due to a price war between Saudi Arabia and Russia that temporarily ended OPEC+ production quotas. Since that time, new production quotas were implemented and U.S. oil production reduced significantly due to the effects of low oil prices.  Oil prices have recovered somewhat but demand remains low for oil, natural gas, refined products and chemicals.

This Second Quarter matrix reflects the high impact and likelihood of COVID-19, the price collapse and demand decrease. It also reveals a looming U.S. presidential election that will have major impacts on energy regardless of the outcome. New items appearing on the matrix include congressional initiatives such as an infrastructure package, the House Select Committee on the Climate Crisis plan, green energy tax incentives, and the Senate Energy Committee legislative package, none of which are expected to become law, but are important to monitor for future development. Other new items of note include RFS-small refinery waivers, nuclear waste policy and an Executive Order on bulk power systems. 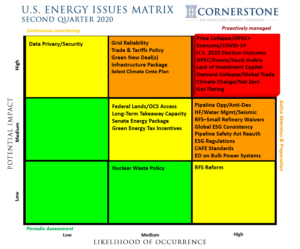