The U.S. energy industry is at an interesting crossroads. After decades of production declines and growing demand for imports, several recent years of robust production from U.S. shale plays have made America the largest oil and natural gas producer in the world. It has also allowed the United States to become one of the world’s largest exporters of those commodities as well as refined products (like gasoline, diesel, and jet fuel) and petrochemicals. At the same time, our ability to cost-effectively produce energy from renewable resources, both at home and abroad, has grown substantially.

This news about domestic energy production is tempered by some big challenges the country faces today. While most of the oil and natural gas growth has resulted from shale plays like the Permian Basin in Texas, margins in those regions are very small. Low commodity prices, oversupply, and weaker demand are having an impact on profits and ultimately will impact exploration and production (E&P) spending and ultimately production itself. Given that situation, oil and gas investments are less attractive in the short-to-mid-term. Additionally, a wave of mergers and acquisition are expected in the E&P and oilfield services sectors. Longer term, investments in fossil energy are increasingly being viewed as less attractive to investors concerned with climate change, especially institutional funds, many of which will not invest in the sector.

Energy is a global commodity-driven business, and geopolitics always has a strong impact on the health of the sector. Ongoing tensions in the Persian Gulf region are perhaps buoying energy commodity prices while the ongoing trade war between the United States and China creates uncertainty for U.S. producers and exporters who have looked to sell American energy to growing markets in China and the rest of Asia. Adding to the challenges, natural gas, long considered an environmentally friendly bridge fuel, has been targeted more and more in the U.S. and globally as just another fossil fuel.

In order to better track these and other big issues that the U.S. energy industry is facing, Cornerstone Energy Solutions (CES) is publishing its first-ever U.S. Energy Issues Matrix. While the issues matrix is a tool that is familiar to many individual companies, CES has produced a matrix that identifies the collective issues and risks to the U.S. energy industry.

Each quarter, beginning with the current Q3 2019 Risk Matrix, CES will survey the energy industry and update the matrix.  The Y-axis on the matrix measures the potential impact or consequences of the issue in terms of dollars or reputation to the industry. The X-axis measures the likelihood of occurrence (or likelihood that the event will be impactful). Identified issues are placed on the matrix to reflect the current combined level of risk, severity, or need for attention. The matrix is color-coded with the lowest level of severity in green and the highest in red. 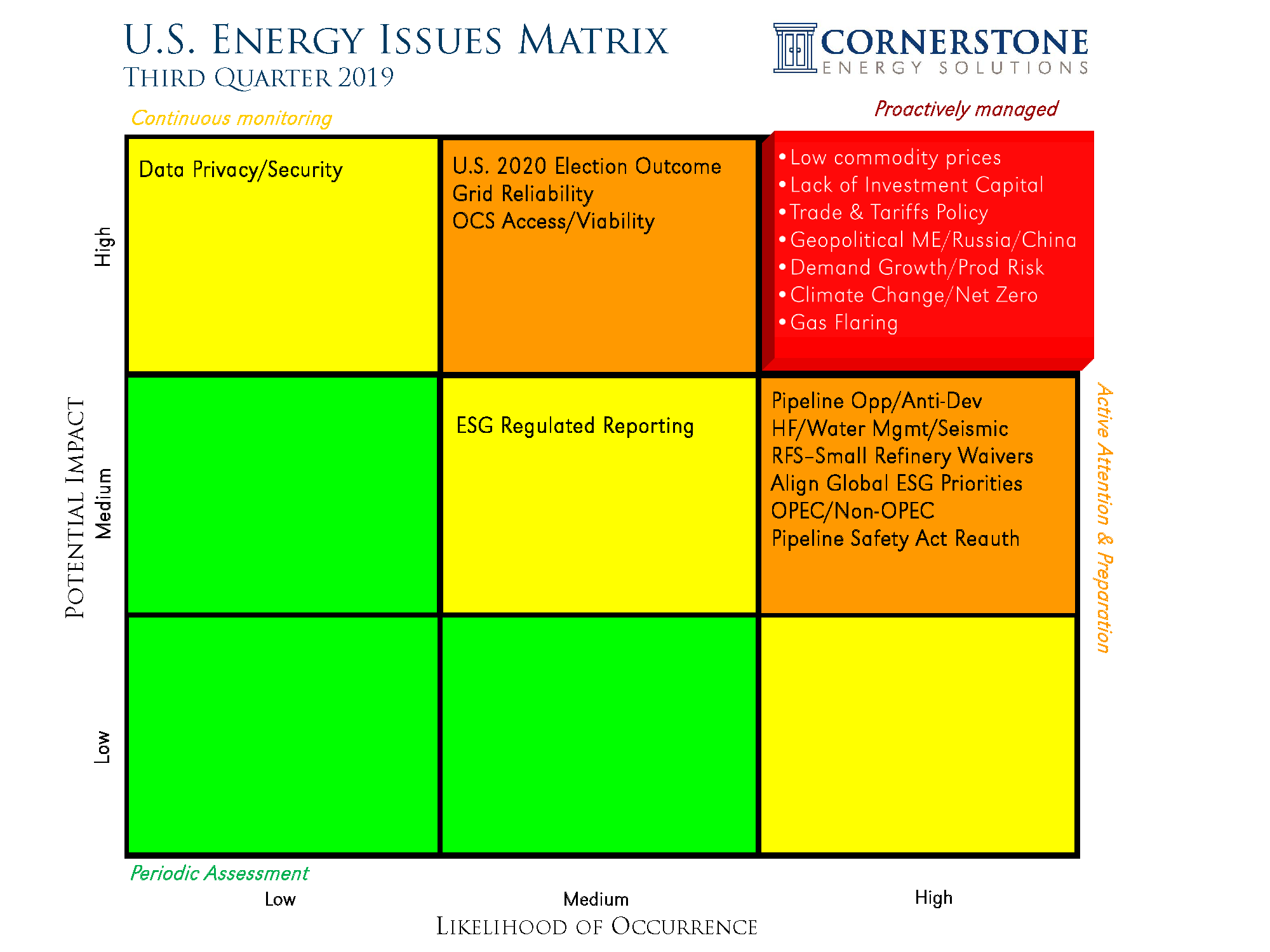 The 3rd Quarter 2019 U.S. Energy Issues Matrix is the first to be posted by CES. Its Red High/High issues include:

Each quarter, CES will consult with energy industry stakeholders to obtain and incorporate their input into the issues matrix. If you are interested in providing feedback or would otherwise like to comment on the matrix and future updates, please reach out directly at jbelcher@cgagroup.com.