Readers of our July 8 Cornerstone Weekly Energy Update were notified of a July 9 U.S. Senate hearing addressing a slate of energy bills.  Nearly half of those bills, all introduced since April 2019, propose government funding and assistance for electricity storage.  Add in the June 13 Financing Our Energy Future Act (S.1841), and that makes a half dozen initiatives seeking to grant special consideration to energy storage.  By legislative standards this is a pretty torrid pace.  So, what’s up? 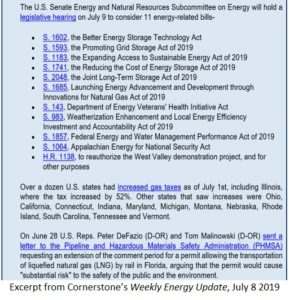 The timing of these bills coincides – perhaps not coincidentally – with the Federal Energy Regulatory Commission’s (FERC) January 2019 rejection of a proposed Department of Energy (DOE) rulemaking, under which states could provide financial support to distressed coal and nuclear plants. FERC essentially said such subsidies were contrary to the efficient workings of competitive wholesale markets. That decision spawned a still-open docket about the best ways to reduce emissions while ensuring electric grid resiliency.  The debate, including the role of energy storage, remains unresolved even as states increasingly move to implement their unique views on how power markets and power policy should coalesce.  Uncertainties reign, but the recent mostly bi-partisan push in Congress intends to step up the pace on energy storage.

While these bills are all in a nascent stage, a couple of messages seem clear.  First, the challenges associated with a transition to renewable energy and intermittency are no longer the nuanced domain of power industry operators.  Legislators now view it as a mainstream concern that energy storage can address.  Second, some legislators appear to also recognize that energy storage costs remain higher than alternatives – namely natural gas-fired turbines – and are willing to fund storage technologies to shift the economics.

For the natural gas industry, the signals are ominous because fair competition is critical to serving power generation markets. Despite its numerous cost, operational, and environmental advantages in managing intermittency, little legislative or policy support is directed to gas-fired generation. On June 12, FERC Chairman Neil Chatterjee told the House Energy & Commerce Committee the Commission is “not going to put our thumb on the scale” to favor certain resources over others. Notwithstanding, these energy storage bills suggest legislators do not feel similarly constrained, and that federal assistance is needed.

In a briefing to Cornerstone clients on the July 9 hearing we noted that DOE testimony expressed the Administration’s recognition of the need robust energy storage.  The bills appear to be headed to markup where the Senate committee will consider the bill and possible amendments. Senator Lisa Murkowski (R-AK), Chairwoman of the Energy and Natural Resources Committee, has indicated that she plans to move an energy storage package that could include all or some of these bills later this year.

Stay tuned as we share more Cornerstone insights and commentary in the months ahead. Contact Greg Hopper at ghopper@cgagroup.com if you would like to receive our Weekly Energy Update.