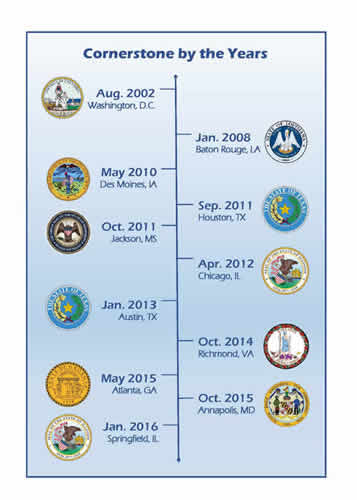 In every company there are decisions that not only define the nature of that business but can make the difference between success and failure. As I reflect on the first 15 years of Cornerstone Government Affairs, the decision that stands out most for me is one we made a decade ago, when we began a major diversification of our company through the addition of a state government relations practice.

Five years after its founding, Cornerstone had doubled in size and earned a reputation as one of the premier budget and appropriations firms in Washington, DC. We were well-positioned for continued success and growth.

However, we saw a period of uncertainty looming on the horizon. The government relations industry was changing. Our political parties were drifting farther and farther apart, foreshadowing the potential for serious dysfunction in Washington. A new administration would soon inherit the White House. And an increased scrutiny of congressionally-directed spending had the potential to alter the annual budget and appropriations process.

Our response to this uncertainty was somewhat unconventional. We made the political and business calculation that difficulty in DC could lead to opportunities in the states. We moved quickly to open our first state office in Baton Rouge, LA. We hired a highly-experienced, well-liked, and well-respected former Commissioner of Administration to help us launch the office. Although we had no clients, we had a vision, a business plan, and an approach that we thought was perfectly positioned to take advantage of the political environment at the time.

Some might ask (and many still do), why Baton Rouge? The answer is at the heart of our firm’s vision and approach. Cornerstone was founded on a commitment to operate as a team—in all respects. We are a fully integrated organization operating in an environment that incentivizes communication, collaboration, and cooperation amongcolleagues on behalf of, and in support of, our clients. Therefore, we only wanted to enter the state government relations space if we could remain true to that philosophy and commitment. That meant we only wanted to be in markets where there was a direct and personal connection back to the DC office that allowed us to offer a larger and more complete team and significantly greater capabilities.

When we started our business, there were two partners in our DC office who were Louisiana natives with a keen understanding of the market, and had great relationships throughout the state, including with the new Governor and other state elected officials. The result was an offering of not a single individual in Baton Rouge but rather a team in both Baton Rouge and Washington, DC, which resulted in a unique offering for our clients. We quickly hired additional professionals in Baton Rouge, establishing a robust state and local capability. From the inception, our office in Louisiana has been and continues to be augmented by a larger team in DC. Today, our Louisiana team has seven senior professionals and has established itself as a key player in the market. We are pleased to serve dozens of clients—including recently being hired by the State itself to assist with its efforts for flood relief—and are gratified by our continued growth and success.

Our success in Baton Rouge led us to go all in on this concept. In 2010, we opened an office in Des Moines, IA. A year later it was Jackson, MS and Houston, TX. Next came offices in Chicago, IL and Austin, TX. In 2014, it was Richmond, VA. Most recently, in late 2015 and early 2016, we opened locations in Annapolis, MD, Atlanta, GA, and Springfield, IL.

Today we have 10 state offices across eight states. By all accounts this is the largest state footprint of any independent lobbying firm in our industry. We have 25 people in those offices and over 150 clients, and the revenue from our state offices accounts for over 30 percent of our total firm revenue. We have a fully integrated team of professionals that work across state offices and between the state offices and Washington, DC. State government relations has become one of the key distinguishing characteristics of our firm, a tremendous differentiator, a key capability in serving and succeeding on behalf of our clients, and an important element of our brand.

While it would be easy to say that this decision was obvious and made without reservation, that notion would be false. There were many unknowns, plenty of risk, lots of questions, and multiple reservations.

In the end, we trusted our instincts and did what we have tried to do from day one—put faith in our people and the collective vision of our team, and rely on a tremendous work ethic to ensure success for us and our clients.

As we celebrate Cornerstone’s 15th year, we are proud of so many aspects of our business, but none more than our highly capable state government relations team. Eight years ago we trusted the vision of our team concept by expanding beyond the boundaries of Washington, DC.

That decision is a fundamental part of what makes Cornerstone the firm it is today.